EN
RU
Loading...
HISTORY
INTERNATIONAL COOPERATION
EVENTS
EN
RU
RUSSIAN
Tsarist Russia
Revolution
Pre-war period
The Great Patriotic War
1945 - 1991
Contemporary Russia
155
155 Years of Mercy
1941 - 1945
1917-1941
1867-1917
2000-н.в.
RED CROSS
1991-1999
HISTORY
INTERNATIONAL COOPERATION
EVENTS
EN
RU
The Russian Red Cross was founded and developed by Grand Duchess Elena Pavlovna, the famous Russian surgeon Nikolai Ivanovich Pirogov, and Sisters of Charity of the Exaltation of the Holy Cross Community, who laid the foundation of public medical care to wounded and sick soldiers during the Crimean War (1853-1856).
Tsarist Russia
In 1917, the Russian Red Cross Society (RRC) celebrated half a century of its existence.
It was the largest public organization in the Russian Empire. There were 136,850 people working under the Red Cross flag, including 5,500 administrative staff. There were 39,000 members of the RRC.
REVOLUTION AND THE PREWAR PERIOD
THE RED CROSS AT THE FRONTLINES OF THE GREAT PATRIOTIC WAR
1991 - 1999
1945 -1991
After the October coup in 1917, the Main Directorate of the Russian Red Cross Society (RRC) was disbanded, and the Committee for reorganization of the Society was established instead. By the Decree of the Council of People's Commissars of the RSFSR of January 4, 1918, property and capitals of the Red Cross were transferred to the state ownership. But in June 1918 local Red Cross institutions started to be restored, and at the same time a new body called the Provisional Main Directorate of the RRC appeared.
November 20, 1918 is the official date of the beginning of activities of the Red Cross Society of the Soviet period, and on May 18, 1923, chairmen of the Red Cross Societies of Russia, Ukraine, Belarus, Armenia, Georgia and the Red Crescent Society of Azerbaijan signed a contract to establish the Union of Red Cross and Red Crescent Societies of the USSR (URCRC of the USSR).
During the Great Patriotic war, the Society trained 263,669 nurses, 457,286 vigilantes and sanitary instructors, 39,956 nurse assistants, formed 5,247 sanitary brigades and 210,000 sanitary posts for the local anti-aircraft defense.
18 female students of the Red Cross were awarded the title of Hero of the Soviet Union, and the sanitary instructor Matrena Semenovna Necheporchukova (Nazdracheva) became Full Cavalier of the Order of Glory. Much focus was given to involving the population in donors activity. 700 thousand liters of donor blood were sent to the war front.
The bitter outcome of the war was millions of the dead and missed, thousands of the elderly and children, who lost their relatives and loved ones. To restore separated families, help relatives and friends to find each other - that task was assigned in March 1945 to workers of the Central Displaced Persons Information Center under the Executive Committee of the Union of Red Cross Societies and the Communist Party of the USSR (now the Russian Red Cross Tracing and information Center).

It received more than 3 million applications, documents from Soviet and foreign citizens, National Red Cross and Red Crescent Societies.
Before the collapse of the Soviet Union, the Soviet Red Cross was the world's largest public organization. It had 1 million members. The XII Extraordinary Congress of the Council of the Red Cross and Red Crescent Societies of the USSR worked for one day and adopted a document "On dissolution of the Council of the Red Cross and Red Crescent Societies of the USSR". The Russian Red Cross (RRC) became its legal successor on the territory of the Russian Federation.
HISTORY OF THE FOUNDATION AND DEVELOPMENT OF THE RUSSIAN RED CROSS
1854 - 1917
1917 - 1941
1941 - 1945
1945 - 1991
1991 - 1999
Since 1993, the Russian Red Cross has developed program-targeted activities. Sources of programs financing in recent years are membership fees and targeted donations from Russian citizens, Russian organizations and businesses, financial support from the International Federation of Red Cross and Red Crescent Societies, the International Committee of the Red Cross, National Red Cross Societies of the Netherlands, Sweden, Canada, the USA, Great Britain, Germany, Finland, Denmark, Norway and other countries.
The International Red Cross Society was founded in 1864, when representatives of 12 European governments signed the Geneva Convention, an international agreement to improve the plight of wounded and sick in the Army.
For the first time in history, it was made compulsory to give care to all wounded, regardless of which side they belonged to, provide immunity to hospitals, infirmaries, and sanitary personnel.
MORE
MORE
MORE
MORE
MORE
On May 15, 1867 (May 3, Old Style), Emperor Alexander II approved the Charter of the Care Society for the Wounded and Sick Soldiers, which was renamed the Russian Red Cross Society in 1879. The Emperor, Grand dukes and princesses, high-ranking secular officials and members of the high clergy became honorary members of the Society. The Society was under the patronage of the Empress, enjoyed assistance of all government officials, and received considerable rights.
THE RUSSIAN RED CROSS TODAY
Today, the Russian Red Cross consists of 84 regional branches and 600 local branches. In addition, the Russian Red Cross Tracing and Information Center, the Russian Red Cross Academy, and the Russian Red Cross Hospital in Ethiopia operate as independent institutions within the structure of the Society.

In 2021, Francesco Rocca, President of the International Federation of Red Cross and Red Crescent Societies, paid an official visit to Moscow. He visited the #WEARETOGETHER# civic forum and held talks with Russian President Vladimir Putin, who noted the importance of the Red Cross humanitarian mission and cooperation with colleagues and partners in other countries.
Employees and volunteers of the Russian Red Cross have the opportunity to undergo international trainings within the Movement and become its delegates, who assist in resolving humanitarian crises and challenges in the territories of other states.

Since April 2021, 26 bilateral international meetings with National Societies and more than 15 meetings with diplomatic missions, intergovernmental and international organizations were held.
Every year, the Russian Red Cross, along with thousands of employees and volunteers from National Societies around the world, takes part in a torchlight procession in Solferino, Italy, paying tribute to the founder of the Movement, Henry Dunant, and the events of 1859, which triggered the Red Cross foundation.

Within the framework of the Movement's Fundamental Principles, National Societies, as well as the ICRC and IFRC, share experiences and assist each other in implementing joint humanitarian programs and projects to help the most vulnerable citizens and migrants.
Francesco Rocca, President of the International Federation of Red Cross and Red Crescent Societies (IFRC), at the #WEARETOGETHER forum in Moscow.
Pavel Savchuk, President of the Russian Red Cross, and Jagan Chapagan, the IFRC Secretary General, at a meeting in Geneva.
The IFRC Vice-President and President of the Turkish Red Crescent, Kerem Kınık, at a meeting in Moscow.

EVENTS TO CELEBRATE THE 155th ANNIVERSARY OF THE RED CROSS 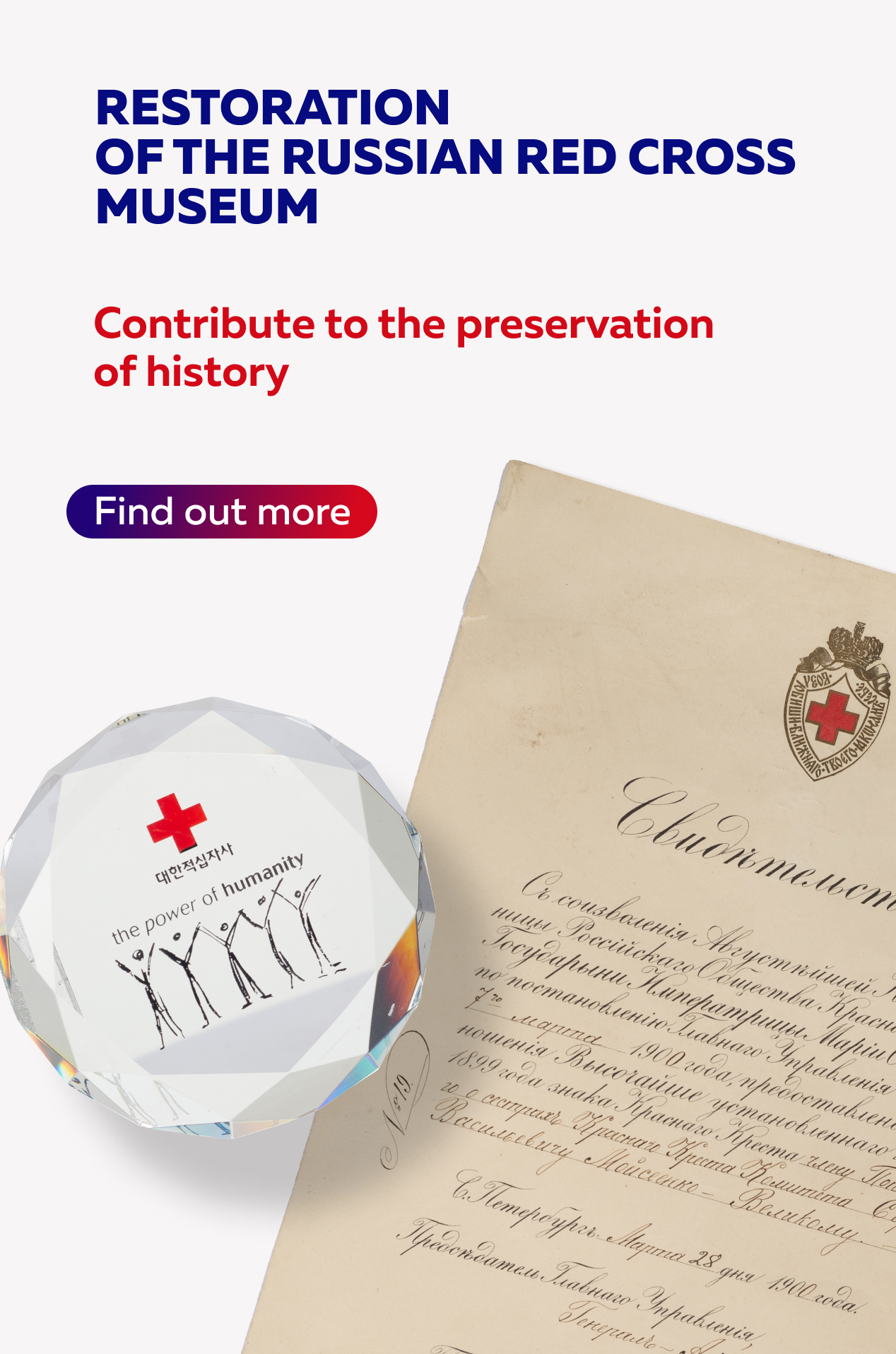